One of today’s themes is about a song that brings back a memory or a moment when you heard it.

While I will go to the 80’s any time I need good music, I do not equate them with any particular moment/memories; maybe sitting around my bedroom with a stack of cassettes, or a ride in the car, wherever we were going. The opening chords of “Welcome to the Jungle”. Rick Astley (the first time around). George Michael wanting your sex (yes YOURS!). Even though I look back on it oh so fondly, does it mean that it was a better time? No, the world had terrorism, political scandals, famine, and a nuclear power plant exploding back then too. But hey, we had a great soundtrack to it.

As I reached adulthood in the 90’s, any hit song from that decade gets me nostalgic; even the ones I couldn’t stand. Like that song by Blind Melon that nobody cares about; just that “The Bee Girl” is in it. I heard it the other day and it’s still…wait for it…buzzing in my head. Searching the internet about that gal I learned a few things;

None of which I can brag about accomplishing (I have ALWAYS been cute). 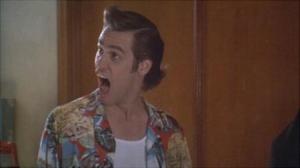 Even during that phase in college when I looked like Ace Ventura.

Then there is Faith No More’s “Epic”. This is from the time at the strip club many moons ago, when the next girl up asked if we had any (musical) requests; we wanted metal! So she indulged us with Metallica, then FMN. “You want it all but you can’t have it/It’s in your face but you can’t grab it”. Consider the moment – have there ever been more fitting lyrics?

These days, anything that is popular is due to it being awesomely awesome (very rare) or awesomely bad (daily basis). A Friday cannot go by without Rebecca Black’s song banging through my head. The “Climbin through yo’ window” rap/newscast song has made me paranoid about locking my windows. And my constant fear that anyone from the cast of Jersey Shore will make a music album.